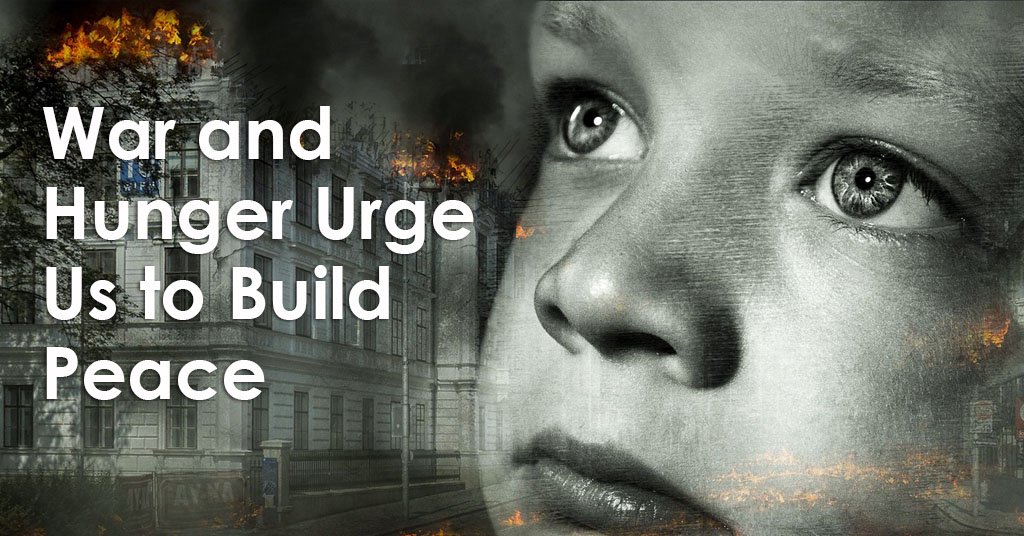 War and Hunger Urge Us to Build Peace

Every year since 1967, the Pope delivers a special message for January 1, celebrated as World Peace Day by the Catholics.  Though the main theme is Peace, the annual message varies depending on the current world reality.  Pope Francis’s message for the 56th World Day of Peace is ‘There is Light even in our Darkest Hour.’

In his message, Pope Francis reminds us of the darkest hour the world experienced due to COVID-19. What do we have learned from the darkest hour of COVID-19? We all realized how fragile our lives are, and more than ever, we also became aware that we are interdependent and interconnected. The Pope stresses that “we never emerge the same from times of Crisis: we emerge either better or worse.” Are we better today or worse?

The Pope urges us to place the utmost importance on the word ‘together’ because none of us can be saved alone. Besides COVID-19, the Pope mentioned other viruses like conflicts and war, ecological crises, hunger, and poverty, to name a few.  Let us focus on two areas, namely, Conflict and war and Climate Crisis and hunger.

Both these problems make millions as war refugees and climate refugees and force them to live in extreme poverty and hunger and are displaced from their homes. Let us heed the invitation of Pope Francis to be artisans of peace and respond to human and ecological crises.

The president of the UN General Assembly on September 26, 2022, addressing the leaders of the Nations assembled at the UN Headquarters in New York, said: ‘that humanity has entered a new era, we don’t have a name yet for it, but we feel it has arrived. In this new epoch, the basic conditions for global cooperation have changed; there are new challenges, changing priorities, changing roles, and changing ways.  In this new era, fresh pages of history are written, with new divisions and new alliances, and new successes on them’.

In this new era, we are to work ‘together’ to respond to the cry of the earth and the cry of the poor. Pope Francis reminds us in the encyclical Evangelii Gaudium that “It is a challenge to build up society, communities, and businesses by acting as peacemakers. It is to show mercy by refusing to discard people, harm the environment, or seek to win at any cost. To do so requires the willingness to face conflict head-on, to resolve it, and to make it a link in the chain of a new process’’ (EG 227).

As members of the Arnoldus Family, like our founding generations, let us not be deterred by this new era of new divisions but be bold to be peacemakers as this year we mark the 60th anniversary of the encyclical Pacem in Terris.

Conflicts and wars worldwide have afflicted not just people directly experiencing war but their secondary effects on the rest of the world. The war in Ukraine has rendered millions of war refugees, also causing hunger and poverty but has blocked wheat supply to the many countries in the continent of Africa that are experiencing hunger and starvation due to the climate Crisis.

Pope Francis, in his message, urges all “to join in caring for our common home and in implementing clear and effective measures to combat climate change”; “to battle the virus of inequality and to ensure food and dignified labour for all, supporting those who lack even a minimum wage and find themselves in great difficulty.” He further remarks that “The scandal of entire peoples starving remains an open wound.”

According to the World Food Programme (WFP), though there is enough food for all, the world is facing a food crisis of unprecedented proportions. Due to COVID-19, conflict and war, and climate crisis, in 2022, almost 828 million people went to bed hungry. Most of these 828 million people live in areas afflicted by war and violence and in countries that are affected by climate crisis like deforestation, droughts, floods, hurricanes, and earthquakes. (https://www.wfp.org/global-hunger-crisis). Due to drought, soil erosion, and floods, many people around the world cannot farm their land and hence are forced to become climate refugees.

‘The right to adequate food is realized when every man, woman, and child, alone or in a community with others, has physical and economic access at all times to adequate food or means for its procurement.’

In the human rights principle, food must be accessible. So, we must act together. What can we do as religious communities individually, in our parishes, in local communities, as provinces/regions, and as congregations? Our members are present in countries that are experiencing increased poverty and hunger due to COVID-19, countries where there is active war and conflict, and countries with severe food shortages due to the climate crisis.

Our commitment to our religious missionary calling compels us to take some concrete actions such as:

Pope Francis asks us to remain steadfast even during these challenging times. “Now, concerning the times and the seasons, brothers and sisters, you do not need to have anything written to you. For you, yourselves know very well that the day of the Lord will come like a thief in the night.” (1 Th 5:1-2) As we begin 2023, let the teachings of Jesus echo daily in our lives. Blessed are the peacemakers, for they will be called Children of God (Mt 5:9).


Let us dedicate ourselves to being artisans of peace in our words and actions and care for all creatures, both human and non-human. And pray that May the Holy Triune God live in our hearts and in the hearts of all.

Gretta Fernandes, SSpS, is the Mission Secretary of the Congregation in Rome and member of the Director Board of Vivat International.

In 1963, Pope John XXIII, at the height of the cold war between the USSR and the USA and the production of nuclear weapons, reminded not just the Catholics but all people of goodwill of their rights and duties, which are universal and inviolable (PT 9).  Human society demands that men be guided by justice, respect the rights of others and do their duty. It demands that they be animated by such love as will make them feel the needs of others as their own (PT 36).