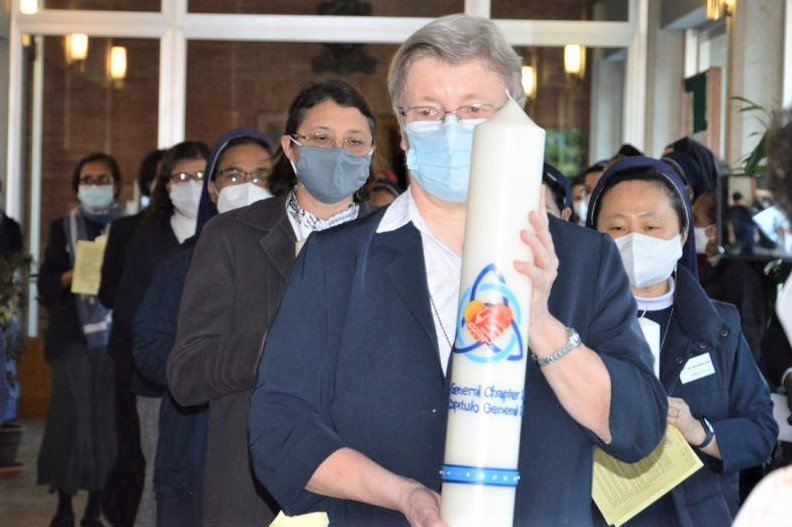 Inauguration of the 15th General Chapter

Chapter activities began at 9 a.m. with all the capitulars, guests and service team gathered in the chapter hall for the introductory procedures. Sr. Maria Theresia opened the session by welcoming and thanking everyone for their presence. Francesco, of the Society of St. Paul, gave an overview of the house and its functioning.

Then, the Congregational Leader Sr. Maria Theresia Hornemann presented the service teams composed of 9 sisters who will help with essential services such as the facilitators, secretaries, translators and the Communication Team. After the work continued with some more orientations about the use of technology and the meeting of the base groups.

See who is part of the Service Personnel Sr. Katherine O’Flynn (on left), belongs to the Congregation Faithful Companions of Jesus. She is from Ireland and lives part time in both, Spain and United Kingdom. She has many years of experience in leadership and facilitation of groups.

Sr. Mariana Mercedes Camezzana is from Argentina South, studied Theology, and is a Councilor and a mediator. As missionary have been in Zambia, Sud Africa, Ireland and nowadays in Argentina. Sr. Edita Vera is from Argentina Misiones, is a nurse and was in Ethiopia as a missionary. She will translate from English to Spanish.

Sr. Maria Valeria Florkova is from Slovakia, worked in Papua New Guinea for 6 years and now is in her province of origin. She will translate from Spanish to English. Sr. Elsie Kannampuzha Varghese (on left) is from India Central, worked in Education and in the leadership as Provincial. She is the current English Secretary, in Rome.

Sr. Debra Ncube is the Chapter Secretary Assistant. She is from Zimbabwe, joined the congregation in Zambia and actually belongs to the Region of Spain-Portugal

Sr. Maria Yosefina Neno (left) is from Timor – Indonesia. She has been on mission in Poland and for the past 6 years in Rome.

Sr. Ana Elidia C. Neves, from Brazil North, is a journalist and the current Communication Coordinator, in Rome.

Sr. Gini George is from India Central and studied Radio Television Production. She was in Ireland and Rome

In the afternoon, at 4:00 pm, there was the Opening Mass of the Chapter, presided by Fr. Paulus Budi Kleiden, Superior General of the Society of the Divine Word. The ceremony began at the retreat house reception. Sr. Mary John Kudiyiruppil gave an introductory reflection about the meaning of starting the General Chapter after so many changes due to the Coronavirus pandemic.

Sr. Maria Theresia led the large chapter candle into the Chapel, followed by the 10 facilitators of the groups, each one with a candle, and all the other participants.
The Mass was broadcast live and can be seen on the Congregation’s YouTube Channel. In his homily, Fr. Budi elaborated on the theme chosen for the General Chapter: ¬Immersed in the life of the Trinity, transforming the world with compassion”. His homily is published in full on our website.

The Inauguration of the Chapter

After Mass, all went in procession with candles in front of them to the Chapter Hall, where the Veni Creator was sung and Sr. Maria Theresia declared the 15th General Chapter officially opened. Then there was a moment of interiorization in which all signed a term of commitment and confidentiality regarding to the Chapter.

After the inaugural ceremony, the chapter members were invited to follow the official procedures by voting on the various aspects that give legitimacy and authority to the General Chapter as the highest authority of the Congregation. 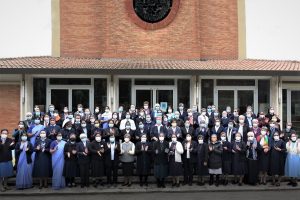 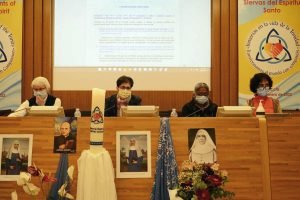