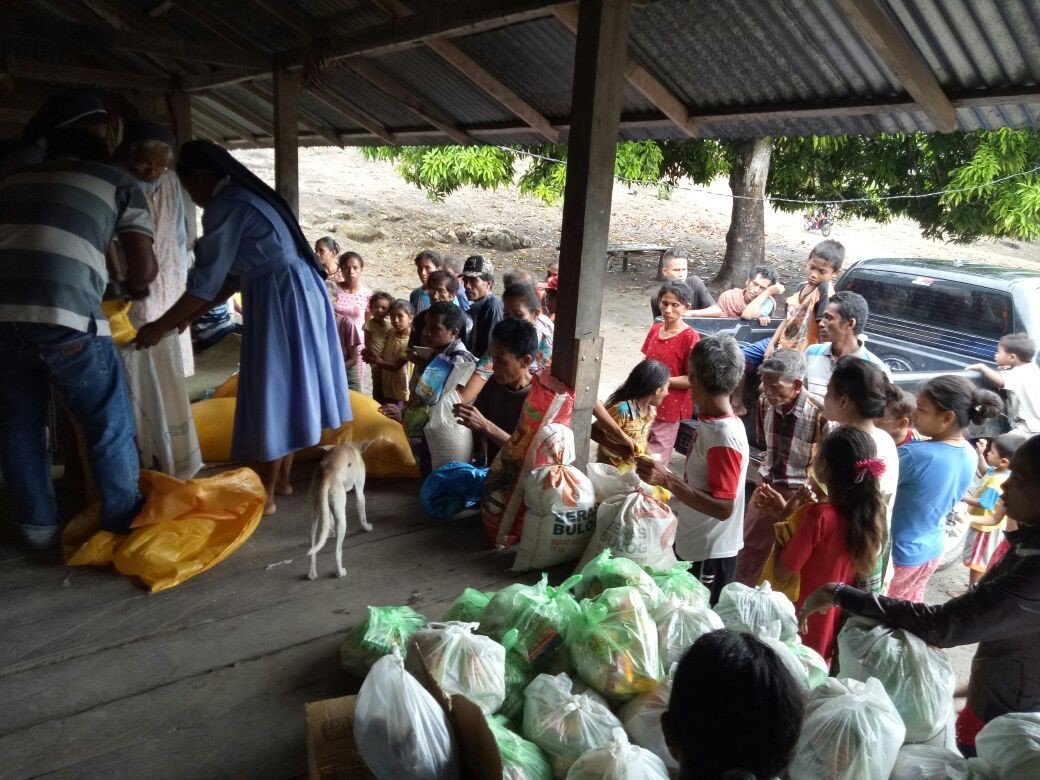 The sisters of West Flores Province commemorated the FIRST WORLD DAY OF THE POOR on different days according to each mission territory. In Ngalu territory, in our community of Mary Queen of the Universe, the celebration took place on Wednesday, 15th of November 2017. They focused their service on Kandara Mission Station, a farming village with 40 families. The people are poor not only economically, but also in other aspects of life. Many of them are still Marapu – a traditional religion of Sumba. On that day, Sr. Mary Magi, Sr. Thres, Sr. Maria Elsa and Sr. Yuliana visited them in a special way. They gathered in the village hall, prayed the Rosary and continued with faith sharing. On this occasion, the sisters distributed to each family equal portions for their daily needs of rice, various vegetables and toiletry articles. In their sharing the people expressed the great joy of being visited, the concern, and especially the gifts for their family needs. They also experienced love and they were grateful for that.

Also on Sumba Island, the sisters of St. Michael Community of Waingapu, visited several poor families after the Sunday Mass on 19th of November. Srs. Ma. Euphrasia, Maria Elsa and Agata, went around the village and met the families in their homes. They were welcomed warmly and had a time of sharing and experiencing the atmosphere of the household. The families this community visited are Protestants of Sumba or GKS, Moslems and Marapu the traditional beliefs of people in Sumba. The sisters provided some daily necessities: rice, milk, sugar, various vegetables and school materials for the children such as notebooks and pens.

In Ruteng, three communities, Holy Spirit, Sacred Heart of Mary, Ruteng and St. Rafael, Cancar, organized a Charity Day in our Saint Theresa Hall on Sunday, 19 November 2017. More than one hundred people came there. They were the poor families who are part of these communities’ ministry. At eight a.m. almost all the participants were present at the hall. Sr.Irene Lium, led the gathering and began with a short prayer service with sharing, based on Mat.25:14-30 about the talents. In order to create a family atmosphere, the participants divided into five big groups for the sharing and the sisters joined the groups. Freely sharing their feelings, many of the people expressed that they are are happy and grateful for the service of love offered by the sisters in each territory around Cancar and several places in Ruteng itself. Through the presence and loving service of SSpS sisters, they experience God who cares and loves the needy and the afflicted. At the same time, they are also being encouraged to move forward in facing their daily life. The accompaniment of the sisters somehow empowered them to find ways to use their talent in order to improve their life situation. Moreover, in special way, through the Charity Day gathering they felt encouraged by the sharing and presence of each other, giving them a strong feeling of being one family with each other and with the sisters.

After this session, the participants were given refreshments prepared by Sr. Albertine and her team with the help of our postulants. After that, the gathering continued with a Eucharistic celebration with Fr. Emanuel Sangu, SVD as celebrant. In his homily, he made some important points: the awareness of our diversity in using the talents given by God. This diversity must lead all towards unity, in the family, in the Church community and in society for the common good. Furthermore, he said that it is important that each one understand and be faithful in carrying out his /her responsibility for the sake of self, others and the good of the society. Therefore, words and actions have to be consistent. After the Mass, Sr. Diana Wisang, provincial, spoke a special welcome and thanks for all, for the encouraging presence of each one at this special Charity Day gathering. She urged the participants not to lose faith in our loving Good, who is always on our side. God who is ever present in our life. We are one though we live in different territories of Rai-Cancar,Leda and Pau of Ruteng.

After Mass, there was time for some sisters to perform poems and songs to entertain the participants. Even some of the participants also took part, telling some stories with a kind of humor that made the situation come alive. At 12 p.m, at the back of the hall the sisters and the families had lunch prepared by Sr. Irmina Bezo, Sr. Ervina, Sr. Kristina Sepa and our students of blessed Josepha dormitory, which is nearby. Meanwhile, Srs. Diana Wisang, Lidwina Mamung and Albertin were preparing gifts to distribute to the participants. The distribution of gifts of various clothes, shoes, sandals and toiletry needs came at the end of the gathering. All were happy not just because of receiving the things but even more because of the family atmosphere of this Charity Day gathering.  VIVA … SSpS.